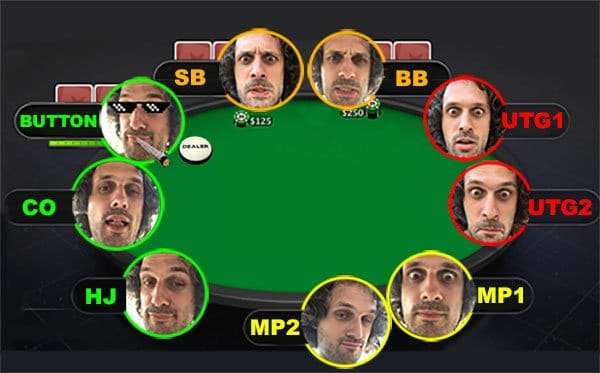 If you want to master poker one of the first things you should learn is what is position and how to use it to your advantage.  Not like many other games poker is extremely positional game. Acting after your opponents gives you information of their hand strength and their tendencies. Playing before your opponents you have to make your decision without any knowledge of what they will do. Player acting after is said to be “in position”. Player acting before is said to be “out of position”. You are usually out of position to some players and in position to other players in a specific hand.
In the full ring poker game (9/10 players) we can divide position in the following categories :

When playing from early position we will be out of position to all players except the blinds. In a more aggressive games we can often get reraised and forced out of hand. We should play only strongest holdings since we will likely be out of position through whole hand.

I would suggest  sticking to these starting hands: 77+,AJs+,AQ+
77+ are 77,88,99…  AJs+ means AJs,AQs,AKs.When there is “s” it means hand is suited (A and Q of spades for example). In a more passive games we can limp small pairs (and try to catch a set cheaply) but in a more aggressive games we should return to 77+ even discard AJs and stick to AQs+

Now we have position against early position and blinds. If there is already raise we can fold everything but the strongest holdings. If we are first to enter the pot we can play more hands since there is less players to act after us.

I would suggest sticking to these starting hands: 55+,AJ+,ATs+,KQs,78s+
If the game is very passive and we do not expect many bluff reraises we can play few more hands like KJs and KQ. If the game is aggressive we should stick to only strong holdings.

Ok now the real fun begins. We can loosen up and play many more holdings. If there is a raise before us we should still be very cautious. When a tight player raised we should not call dominated hands like KQ (dominated by AK/AQ), AJ or KJ. If a loose player raised we can call more hands and play in position. If it is a multi-way hand (2 or more players) we can call hands that flop well. Good multi-way hands are suited connectors (56s+) , suited broadways (any two suited cards between 10 and A) and small pairs. If we do not hit a good hand we can easily release them. When we flop big we can often get a lot of value.

If we called a suited broadway like K10s and the flop comes KQ4 when there is action before us we can fold. If it is checked to us we can bet for value (and protection). That is the power of position in poker. We pay attention to opponent tendencies and act accordingly.

This is a very hard poker position to master. We act last before the flop but first on all other streets. Since we are playing out of position I would suggest playing only strong hands like 99+ AQ+. We can make some exceptions since we already invested some money. First thing if the open is from late position we should add more hands depending on our opponent. If he opens wider range we can add some good hands like KQ,AJ,77,88,ATs+. Other exception is when it is a multi-way pot. Than we can add all small pairs and try to flop a set. If we don’t hit we can release easily.

I would not suggest playing suited connectors from the blinds since they are best played in position. In some cases I would reraise with these holdings against loose open and try to force player to fold. And if a player decides to call I still have initiative and hand that can improve. But this is a bit more advanced concept and probably needs article of its own.

Sometimes there is less players on the table. When there are 8 players we remove earliest position utg1. My advice is to always check your position according to button not according to big blind. This way you can avoid mistakes if some player left or is not playing at the moment. When there are 7 players there is no early position because we remove utg2 also. In a 6 players game we don’t have mp1. Always be observant of number of players and position so you can change your starting hands accordingly.

Keep in mind that on the 6 max tables we usually refer to the positions like this : utg,mp,co,button,sb,bb. There is no HJ and there is only one utg and mp.  Don’t confuse  positions on full ring and on the 6max table. Since this is a post about full ring 6max tables will not be covered in detail.

My advice is to almost always enter the pot with a raise. Not all players will do that. Some of them will just limp (pay the blind). Usually those are bad passive players with weak holdings and we can just raise after them. Occasionally player can limp with AA or KK and wait for a raise so he can reraise. We should be observant and pay attention to our opponents. When we suspect this player could have a strong holding we should just limp behind him with suited connectors and pairs. These are rare occasions and usually we should make isolation raise and try to play in position against the limper.

One of the first signs that player is a beginner is his bet sizes. He either bets to big or to small or just check and expect others to bet. First understand what position  you are on and where is you opponent than learn proper sizing.

When you are first to enter the pot raise x3 big blinds.

If there are limps raise x3 big blinds + every limp.

When reraising use x3 size of the open if you are in position and x3 +2big blinds out of position.

Don’t rush your progress. Understanding  position in poker should be your priority if you are serious about the game. Always check your position before you will decide what to do. Until you have more experience stick to my raising and calling suggestions. When you progress more you will find your own style and add or remove hands accordingly. Pay attention to bet sizing. If you are using wrong sizes you are giving either too good or too bad odds to you opponent. That will cost you money  so stay focused on these concepts until you master them. Check also my full ring instructional video .

If you have any questions fell free to contact me or join discussion in popular poker forums like 2+2.